Be as random as you want! 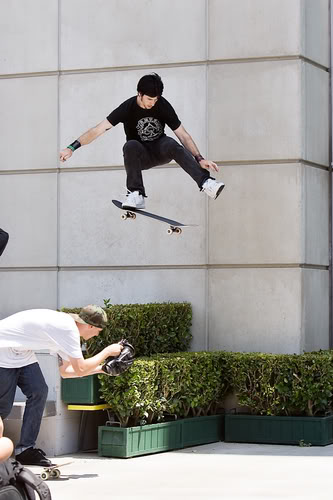 Jamie Thomas says Chris Cole can "go to any spot, it doesn't matter what it is - a ditch, a quarterpipe, a ledge, a bank, a rail - and he can do anything." Chris Cole is also known for being extremely consistent, something important for competitions. He also says that his larger size makes some of his tricks look small.
Chris Cole Favorite / Signature Skateboarding Tricks:

As funny as it sounds, Chris Cole's favorite trick is the ollie. He says he loves to be going really fast and and ollie over short, steep gaps. He's also well known for skating as well switch as he does regular (sometimes even better!).
Chris Cole Skateboarding Career Highlights:

Chris Cole says, "I started skating when I was about 8 or 9, right at the decline in skateboarding, right when everybody quit. I was once a kid who skated out in front of my house on a curb for two years - alone. I never skated anywhere else." Chris Cole was a skate rat though and through, and became pro though sponsor-me videos, instead of competitions. Chris Cole still gets nervous at competitions and doesn't like them, but does incredibly well even so.
Chris Cole Interesting Fact: